Ping times with different cFosSpeed versions
(down / up - without base delay -

Tested as the fastest DSL driver

Ping times are drastically reduced for all connections! cFosSpeed version 6.50 offers the best Traffic Shaping ever.

How does Traffic Shaping work?

No Traffic Shaping:
ACK packets are stalled and delayed by a simultaneous upload. As a result, the download is slowed down as well.

cFos Traffic Shaping:
ACK packets are prioritized in the upstream, allowing the download to continue at maximum speed.

cFos Traffic Shaping reduces delays during data transfer and allows you to surf the Internet up to three times faster. So you can use the full bandwidth of your connection!

During TCP/IP transfer, a certain amount of data needs to be confirmed upon reception before more can be sent. Stalling data confirmation results in delays and transfer-rate slowdowns, thus forcing the sender to wait. Especially for DSL and cable, it is possible to slow a download to a crawl by choking the upstream channel (which has the smaller bandwidth anyway) with an upload. This is because in such a scenario there is not enough upstream bandwidth left for data confirmation.

The standard solution so far has been to try and compensate for this by increasing TCP window size, thereby allowing more data to be sent without immediate confirmation. The main problem here is that this also leads to high ping times (latency) and significant delays during Webpage rendering. Latency of up to 2 seconds is not uncommon for TCP windows with a size of 512k. In short, huge window sizes just won't let you achieve full download speed.

By contrast, cFos Traffic Shaping prioritizes data traffic in such a fashion that important packets zip past regular packets. This way, receipts always arrive in time, and uploads won't ever choke your broadband connection again!

cFos Traffic-Shaping technology recognizes a number of important packet types and prioritizes them not only to keep Internet traffic running smoothly but also to ensure particularly low ping times. This not only accelerates surfing and download speeds significantly, but it is also a decisive advantage for online gaming.

With cFos Traffic Shaping, you will notice measurable improvements and benefits like: 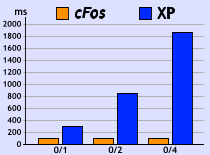 1-4 uploads: While ping times remain consistently low with cFos, the XP driver "slows down the system."

Without Traffic Shaping, ping times can easily reach a horrific 2 seconds, which will make participating in Telnet or SSH sessions a chore – if not outright impossible. But with cFos Traffic Shaping, latency remains normal.

This alone should make for a totally new surfing experience!

It also means that while surfing the Web, you will be hard-pressed to even notice that there are any data transfers running in the background. Again, such drastically reduced latency will come in especially handy for online gaming.

First, cFos Traffic Shaping measures upstream and downstream rates as well as ping delays for each Internet connection. It then uses this information to control the scheduling of all Internet data transfer. In addition, Traffic Shaping does assign the available bandwidth dynamically to each individual connection as needed.

Not only does cFos Traffic Shaping prioritize ACKs, but also other important packets like those used for Telnet and SSH. Thus, with cFos Traffic Shaping, filesharing programs or mail uploads choking your connection will finally be a thing of the past!

But don't take our word for it; just see for yourself.

What else does Traffic Shaping do?

Besides prioritizing ACK packets, Traffic Shaping performs or lets you perform the following:

cFosSpeed traffic shaping consists of two major parts: first, find out the maximum line speeds (send resp. receive) and then, send out data with no more than the sending speed and use a priority queue for the rest of the data. Thus, more urgent data can be sent out first. When receiving, cFosSpeed can not change the order of the data packets to be received, but it can slow down the senders so much that the line is not clogged from that side and ping times are nice and low.

cFosSpeed determines transmission speeds by sending out ping packets. These packets are sent out with a small TTL value, so as to return quickly and produce more accurate timings. For this purpose, cFosSpeed sends regular ICMP echo-request Ping packets or small UDP packets, whatever works better.

Over time, cFosSpeed records the lowest ping time. Then, when later cFosSpeed measures higher ping times, it knows that the line must be congested. To counter that, cFosSpeed will reduce sending and/or receiving speed.

This method works quite well for data transmission media that are very stable and work always with the same speed and latency like DSL or Cable. However, it leads to problems on media with highly varying ping times, like wireless mobile connections (UMTS, WiMAX, CDMA, CDMA 2000, etc). A temporary increase in ping time will cause cFosSpeed to reduce its sending or receiving speed, even if such a spike in ping time might not be caused by a clogged line. Thus, the maximum speed might not be reached and cFosSpeed can not use all available bandwidth.

As a solution, cFosSpeed now conducts statistical analysis of ping times over a relative long time period to determine the normal ping time of the connection and the typical deviation from it. This statistical data are dynamically adjusted, so changes in bandwidth or latency are detected and properly reflected. This improves transmission speeds on mobile connections, but also increases responsiveness slightly on DSL or cable connections.

This statistical analysis works fine as long as cFosSpeed can be sure that changes in measured ping times reflect the normal behaviour of the medium. Unfortunately, traffic sent or received over the same line by other users will as well increase the ping times and would poison the statistics and therefore would cause unnecessary slow sending or receiving rates.

cFosSpeed addresses this with its new Net Talk feature: each cFosSpeed connected to the same router (i.e. on the same local network) broadcasts how much data it has sent and received to all other cFosSpeed drivers. This allows all cFosSpeed drivers to adjust their speeds according to the sum of all traffic, not just their own share of it. The result is more accurate statistics, thereby improving the quality of traffic shaping, meaning more data can be transmitted with still low ping times.

Test it on your own!

First, keep in mind that tests with just one upload or download can only measure your connection's maximum up or downstream transfer rate. That is why you will need to generate at least two simultaneous data streams to gauge the effect of cFos Traffic Shaping:

Both cFos and cFosSpeed will calibrate themselves with respect to the connection. This means best results are usually achieved after having used those programs for several days, during which you should run as many uploads and downloads as possible at full speed.

Now send yourself an e-mail with an attachment of at least 5 MB. On a standard connection, this should give you about 5 minutes you can use for measuring. For each test, you should flush your browser cache and keep track of the loading times for your Web sites. All tests should be repeated several times for maximum accuracy. 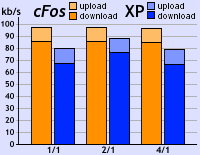 For instance, during one upload and one download, a "typical" DSL connection of 768 kbit/s should reach a download rate of about 87 kbytes/s and an upstream rate of roughly 16 kbytes/s. 11.5 kbytes/s of the latter are available for uploads, while the remaining 4.5 kbytes/s are used to handle data confirmation for the download session.

One easy and accurate way to keep track of ping times is to use our hrPing freeware utility.

What alternative Internet tuning methods are there?

All images and text on this page may be passed on freely.
Click on the pictures for high-resolution images.