It took a long time to develop and we are very proud of it!

Extensive re-write of the cFosSpeed core networking code comes with this new features:

For LAN traffic the new cFosSpeed version consumes so little CPU load it’s hardly noticeable, even at full blast 10 GBit/s LAN traffic. For the Traffic Shaping path there are also improvements in analyzing the traffic and avoiding memory allocations and copies.

These features are currently in beta. Just follow our cFosSpeed Whats New Text to read the latest development news.

What's new in this version

Traffic Shaping is a technique to reorder Internet data packets in such a way that urgent traffic is transferred first and the rest of the data later. For example, data packets of a VoIP application should be transferred quicker (i.e., with less latency) than packets of an up- or download. Usually, it’s not important if the download is ready 1 second earlier or later, whereas a VoIP connection with a delay of 0.5 seconds is almost unusable.

To that end, cFosSpeed was created. It is a software for the Windows operating system and is in widespread use since 2004. There exist some other programs that have a built-in capability to reduce their data bandwidth so as not to interfere with other applications, but cFosSpeed is the only fully automatic software solution in the market today that can be used for all programs on Windows.

Bug fix
Fixed bug in expand_rwin feature for IPv6 against servers that don't support window scaling. Many thanks to Thomas Adamczyk for his help.

DNS queries reduced
DNS names are not stored if the query returns an error. This should reduce periodic DNS queries quite a bit.

Added Ping Statistics
cFosSpeed can now display a history of the ping times of the last 5 minutes. This feature is especially useful for gamers who want to diagnose the cause of lag. After a lag experience, you can now conveniently open the ping statistics graph and determine if the lag came from your end of the line or at a remote location, like the game server or some router in between.

Added support for UPnP capable routers
cFosSpeed can now determine the line speed and the maximum line speed by querying the gateway (router) to the Internet. It supports the functionionality of the UPnP Forum's Internet Gateway Device specification as well as the specification of the DSL Forum. So both types of UPnP routers can help to speed up the line calibration in cFosSpeed. We therefore recommend users turn on UPnP in their routers. 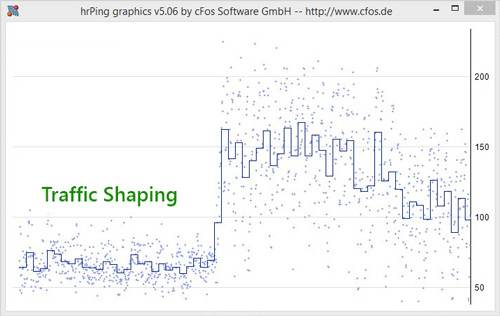 Ping times with and without Traffic Shaping on a 50MBit VDSL connection with 4 uploads and 2 downloads.
cFosSpeed 10 is now available for Windows 10.

cFosSpeed is Softpedia's top pick. Good review of what cFosSpeed does and what it does not. 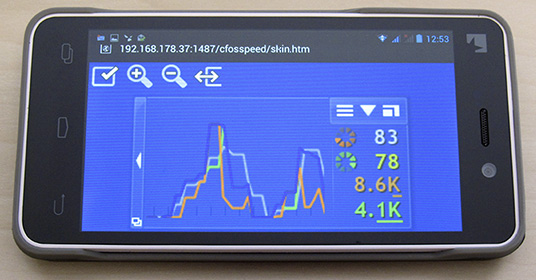 cFosSpeed v9.05 beta build 2090 and higher can now display the status window on your phone or tablet.

Winter Sale from January 7th to January 21st, 2013.
All products 30% off for non-commercial users.

Extended until January 28th - Thanks to your overwhelming support!

How about using cFosSpeed to produce *lag* for a change? This can be easily accomplished with the cFosSpeed class delay management, a feature which is normally used to improve prioritization of the different data streams. Copy both batch files lag.bat and nolag.bat into your cFosSpeed installation directory (where spd.exe is located). Then you can increase the delay by 200 msec by running lag.bat. You can reverse the effect by running nolag.bat.

One technical note: When increasing the lag you will notice that line speed is not the only important factor. Surfing the web etc. can also become slow if the delay is too high.

With the release of the cFos WMI Monitor we offer a special price for the cFosSpeed + cFos Personal Net bundle.

cFosSpeed checks every 2 days if there is program news. If there is, it displays the mail symbol in the status window and opens this web page when clicked. This feature is on by default. If you are not interested in program news, you can turn it off in the context menu under "Options". 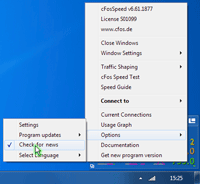 We will post news only a few times per year.

Because reaching people via mail becomes more and more difficult and the social networks become more and more widespread, we decided to use Twitter as our short time news service. If there is something new, for example a new cFosSpeed beta version, we will post that on Twitter. At the most we will post only a few times per week. Therefore if you don't already have a Twitter account, please create one and follow @cFosSoftware to get the latest news. You can then conveniently let the cFos Notifier check for our news on Twitter.